England cricket captain Eoin Morgan will miss this weekend’s fourth one-day international against Pakistan in Nottingham after being suspended for a slow over-rate offence. 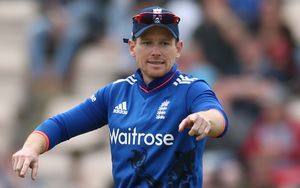 Match referee Richie Richardson imposed the suspension on Morgan after England were ruled to be two overs short after time allowances during their victory over Pakistan in the third ODI in Bristol yesterday.

The International Cricket Council (ICC) said it was Morgan’s second “minor over-rate offence” after being previously found guilty during the Barbados ODI against the West Indies in February.

Morgan was also fined 40 percent of his match fee, while the players were hit with a 20 percent fine.

Wicketkeeper-batsman Jonny Bairstow has been reprimanded by the ICC for hitting the stumps with his bat after his dismissal for 128 in the 29th over of the same match.

ICC confirmed that one demerit point was added to the disciplinary record of Bairstow, his first since the introduction of the revised code in September 2016.