US President Donald Trump has been flown to Walter Reed Medical Center after he and his wife Melania tested positive for Covid-19 yesterday.

Trump, wearing a suit and a mask, walked onto Marine One, the president’s helicopter which had landed on the lawn of the White House. He waved to the news media but did not stop for questions, before the short flight to the hospital.

Trump has released a short video on his Twitter account, 17 hours after his last post, saying he thought he was doing very well and he was heading to hospital “to make sure things work out”.

US President Donald Trump has been flown to Walter Reed Medical Center after he and his wife Melania tested positive for Covid-19 yesterday. 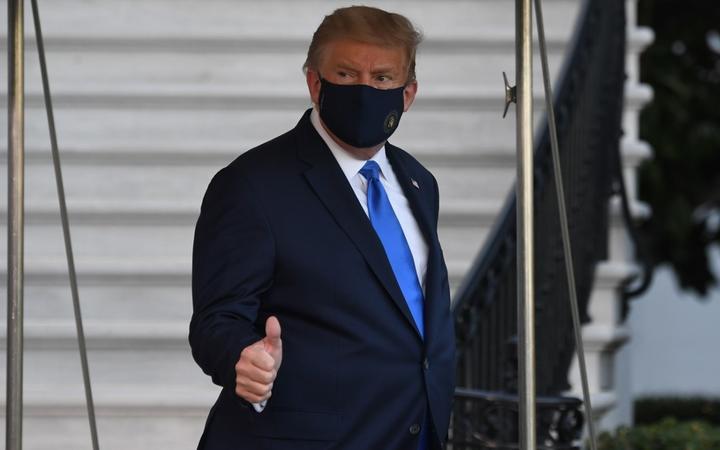 Trump, wearing a suit and a mask, walked onto Marine One, the president’s helicopter which had landed on the lawn of the White House. He waved to the news media but did not stop for questions, before the short flight to the hospital.

Trump has released a short video on his Twitter account, 17 hours after his last post, saying he thought he was doing very well and he was heading to hospital “to make sure things work out”.https://platform.twitter.com/embed/index.html?dnt=false&embedId=twitter-widget-0&frame=false&hideCard=false&hideThread=false&id=1312158400352972800&lang=en&origin=https%3A%2F%2Fwww.rnz.co.nz%2Fnews%2Fworld%2F427486%2Fus-president-donald-trump-taken-to-hospital-after-positive-covid-result&siteScreenName=rnz_news&theme=light&widgetsVersion=ed20a2b%3A1601588405575&width=550px

Trump, 74, has been moved to a special suite at Walter Reed National Military Medical Center in Bethesda, Maryland, for the next few days as a precautionary measure, White House press secretary Kayleigh McEnany said.

“Out of an abundance of caution, and at the recommendation of his physician and medical experts, the President will be working from the presidential offices at Walter Reed for the next few days,” she said in a statement.

The White House has confirmed there will be no transfer of power.

Trump has a mild fever, according to a source familiar with the matter. White House doctor Sean P Conley wrote in a memo that he is “fatigued but in good spirits.”

It was the latest recent setback for the Republican president, who is trailing Democratic rival Joe Biden in opinion polls ahead of the presidential election next month. Biden himself and his wife, Jill, tested negative today.

Trump, who has played down the threat of the coronavirus pandemic from the outset, wrote on Twitter earlier on Friday that he and his wife Melania were going into quarantine after testing positive for the virus, which has killed more than 200,000 Americans and severely damaged the US economy.

An active Twitter user, Trump did not post any messages for the next 17 hours, until he tweeted a short video.

Trump is at high risk because of his age and weight. He has remained in apparent good health during his time in office but is not known to exercise regularly or to follow a healthy diet.

Conley said Trump has received a single dose of Regeneron’s polyclonal antibody cocktail, a technique that is used for treating a wide range of illnesses. Data is limited on its effectiveness for Covid-19 but US infectious disease chief Dr. Anthony Fauci is among those saying it has promise.

Earlier, Trump’s chief of staff Mark Meadows said the president was “on the job” and “in good spirits”, adding that he expected him to make a quick recovery.

Meadows said the president remained energetic, and gave him his usual five or six tasks this morning.

“I hope this serves as a reminder,” Biden tweeted after the result. “Wear a mask, keep social distance, and wash your hands.”

Other close members of Trump’s family have tested negative.

Officials said the process of tracking all the president’s contacts in recent days was ongoing, adding that Trump was considering how he might address the nation or otherwise communicate with the American people later today.

But there has been criticism of Trump’s decision to go to a fundraiser attended by dozens of people in New Jersey on Thursday, apparently when officials already knew about Hicks’s symptoms.

Hicks, 31, travelled with Trump on Air Force One to the first presidential TV debate with Biden in Ohio on Wednesday. Some of Trump’s family members who attended the debate were seen not wearing masks.

Vice President Mike Pence, next in line for the Oval Office, has tested negative for Covid-19, hours after Trump announced that he was infected, Pence’s spokesperson said.

Trump’s test result cast a spotlight on Pence, a Christian conservative former lawmaker who has been one of the few constants in the Republican president’s tumultuous administration, a little more than a month before the two seek re-election to a second term.

Pence, 61, is scheduled to debate his Democratic rival, Joe Biden’s running mate Senator Kamala Harris on Wednesday (US time), and it was not immediately clear how or if Trump’s positive test would change that plan.

Trump and Pence will work from separate residences, a White House official told Reuters, and their staffs will also be separated to protect Pence should he need to assume the duties of the presidency. Pence receives the same intelligence briefings as the president.

Pence would take over as acting president should Trump become incapacitated while undergoing medical treatment. That has happened three times in US history. 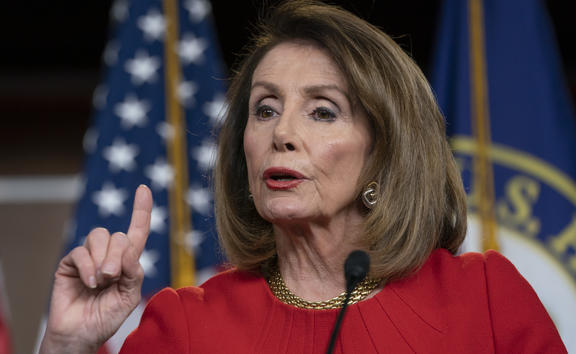 The White House said Trump is “not incapacitated” and is working in isolation while experiencing mild symptoms.

House of Representatives Speaker Nancy Pelosi is next in line of succession after Pence. She said on Friday that she had been tested for Covid-19 and should know her results soon.

In response to Trump’s positive diagnosis, she said: “This is tragic. It’s very sad. … Going into crowds unmasked and all the rest was sort of a brazen invitation for something like this to happen.”

Pence, a former governor of Indiana, has played a largely behind-the-scenes role in Trump’s White House, although he is known to have presidential ambitions of his own.

His deference has endeared him to Trump, helping Pence survive in a White House with near-constant turnover among top officials. But he has sometimes been ridiculed for his public obsequiousness to his boss.

Earlier this year Trump put Pence in charge of the U.S. response to the coronavirus pandemic, a brief that has not gone well. The nation’s death toll from the virus is over 207,000. New cases of Covid-19 rose in 27 out of 50 US states in September compared with August, a Reuters analysis showed.

UK Prime Minister Boris Johnson is among international leaders who have sent their best wishes to the Trumps. Johnson wrote on Twitter: “My best wishes to President Trump and the First Lady. Hope they both have a speedy recovery from coronavirus.”

Other world leaders, including Indian Prime Minister Narendra Modi and his Israeli counterpart Benjamin Netanyahu, also sent messages of support to the couple.

Russian President Vladimir Putin said: “I am certain that your inherent vitality, good spirits and optimism will help you cope with this dangerous virus.”

The president’s niece, Mary Trump, who wrote a scathing book about her uncle, had this message: “I reserve my sympathy, empathy, and despair for those who are sick and for those who have died because they were misled, lied to, or ignored.”