Concussion substitute Yuzvendra Chahal took three wickets as India beat Australia by 11 runs in the first Twenty20 match in Canberra on Friday but the win was soured by an apparent hamstring injury to all-rounder Ravindra Jadeja. 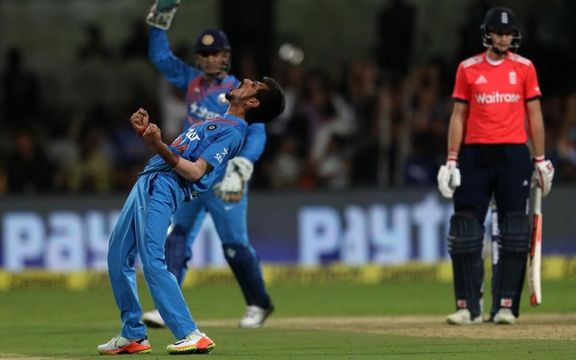 In a contest laced with controversy, Jadeja top-edged into his helmet in the final over but was not tested for concussion on the field at Manuka Oval.

He ended up scoring a valuable nine runs off the last three deliveries to push his team to a defendable total of 161 for seven.

Jadeja, however, was ruled out during the innings break, and Australia coach Justin Langer had a heated argument with match referee David Boon before the home side began its chase at Manuka Oval.

Legspinner Chahal rubbed salt into Australia’s wounds by removing captain Aaron Finch for 35 and star batsman Steve Smith for 12 in quick succession to swing the momentum back to India.

He returned to dismiss Matthew Wade for seven with the last ball of his quota, the wicketkeeper slog-sweeping to captain Virat Kohli at deep midwicket.

India claimed their second successive win of the tour after beating Australia in the third one-day international on Wednesday.

But they will anxiously await the prognosis for Jadeja’s injury less than two weeks before the series-opening test in Adelaide on 17 December.

Australia were also left counting the cost, with Finch suffering a muscle injury in the field and hobbling between wickets during his knock.