South African seamer Anrich Nortje claimed a career-best six-wicket haul and opener Dean Elgar backed it up with an unbeaten 92 runs as the home team forged an early advantage over Sri Lanka on the opening day of the second test in Johannesburg.

Nortje made full use of seamer-friendly conditions at The Wanderers Stadium for a return of 6-56 off 14.3 overs as Sri Lanka collapsed from 71-1 to be dismissed for 157 before tea. 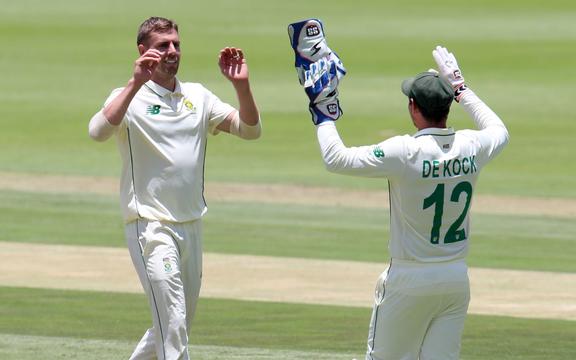 Elgar then set about consolidating the advantage as he moved tantalisingly close to a century at the close of play, steering South Africa to 148 for one wicket in reply, trailing by just nine runs.

Elgar, who reached 92 not out and resisted the temptation to push for his century in the final half hour’s play, featured in an unbeaten 114-run partnership for the second wicket with Rassie van der Dussen.

Aiden Markram was the only South African to be dismissed in reply, caught behind for five, as debutant Asitha Fernando bagged a first test scalp.

South Africa won last week’s first test in Pretoria by an innings and 45 runs and are looking to complete a 2-0 sweep of the brief series.