The world darts number one Michael van Gerwen has been dumped out of the World Championships in stunning fashion. 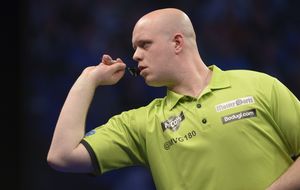 A three-time world champ, the Dutchman has suffered a 5-nil quarterfinal loss to English eighth seed Dave Chisnall in London.

Chisnall will face two-time champion Gary Anderson for a place in the final, with the Scotsman earlier defeating Dutchamn Dirk van Duijvenbode 5-1.