Cricket Australia boss Kevin Roberts has urged Melbourne Cricket Ground staff not to “overreact” to the abandonment of a domestic match due to a dangerous pitch by producing a flat wicket for next week’s Boxing Day test against New Zealand. 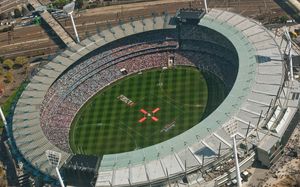 A Sheffield Shield match at the MCG was halted last week because of a dangerous surface on which several Western Australia batsmen took body blows from deliveries that reared up at them.

The abandonment was embarrassing for groundsman Matt Page and Melbourne Cricket Club, but Roberts backed ground staff to produce a wicket that would challenge both batsman and bowler.

“We’re really keen to ensure that the MCC doesn’t overreact to the situation in the last Shield game,” he said.

“The great news was that no players were injured in that situation. We learned a lot from it …

“So we’re confident that there won’t be an overreaction, and that will see a better balance between bat and ball at the MCG.”

The MCG’s drop-in wicket has been under scrutiny since it was given a “poor” rating by the International Cricket Council after a dull draw between Australia and England in the 2017-18 Ashes series.

In last year’s annual Boxing Day test, India beat Australia by 137 runs, and the pitch was rated “average”. But the wicket was still criticised by media pundits and fans for offering bowlers little assistance on the opening day.

Roberts said the fresh wicket for the second test between Australia and New Zealand would have more grass than the previous two Boxing Day strips.

Australia lead the three-match series against New Zealand 1-0 after winning the pink-ball day-night opener by 296 runs in Perth.